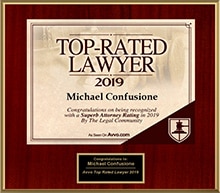 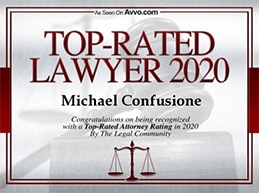 New Jersey attorney Michael Confusione co-founded Hegge & Confusione in 1999 and heads the firm's appellate practice. He has over 20 years of experience in appellate law and has handled hundreds of civil and criminal appeals. Among other honors, Mr. Confusione has been listed among Avvo's 2019 Top Rated Lawyers due to his Superb Attorney Rating by the organization.

Mr. Confusione handles state and federal appeals in New Jersey, New York, Pennsylvania, and the Washington, D.C. area. He has a demonstrated record of success in appellate advocacy, both in small cases involving individual appellants and as lead counsel in major appeals against companies like Ford and NBC.

Mr. Confusione is known as a straight shooter with a hands-on approach to his clients' cases. He offers an objective assessment of a client's best options for appeal and honestly counsels clients with regard to when the cost and effort of an appeal is likely to be in their best interests. And, when you hire Mr. Confusione, you get Mr. Confusione: he works personally on each case and is readily accessible throughout.

Mr. Confusione is admitted to the bars of the United States Supreme Court, the United States Courts of Appeal for the First, Second, Third, Fourth, Fifth, Sixth, Seventh, and District of Columbia Circuits, the States of New Jersey and New York, and the Commonwealth of Pennsylvania. He has authored Developments in Constitutional Law: Sexual Conduct, Sexual Orientation, and State Constitutional Law and Justice Ruth Bader Ginsburg and Justice Thurgood Marshall - A Misleading Comparison, which have appeared in the Rutgers Law Journal. He was associated with McCarter & English, LLP in Newark and Klehr, Harrison, Harvey, Branzburg & Ellers, LLP in Philadelphia before forming Hegge & Confusione.

Mr. Confusione lives with his wife, Susan, and their two children, Andrew and Alexandra. In addition to his active practice, he enjoys running, guitar, and spending time with his family.

Call Michael Confusione or email him at mc@heggelaw.com to discuss your case.

Call our office today at 800.790.1550 or email us at to get started.
“Mr. Confusione has extraordinary appellate skills. He accurately identified relevant issues ... leaving almost no room for my opponent's rebuttal, which of course, makes him very difficult to beat.”
– J.B.

Read More From Our Clients